Just 365 days ago came the announcement…

Seattle, WA — TRACTION (trans • community • action) is excited to join the nonprofit community in the Pacific Northwest. Recently registered as a 501(c)(3) organization in response to the urgent need to regain momentum toward social progress, TRACTION aims to empower and uplift transgender and nonbinary people and create visibility through social engagement, outreach and community service. Through collaboration with existing groups whose programs are serving marginalized and underserved populations within the Pacific Northwest, TRACTION will provide support in the form of volunteer power, funds and publicity.

TRACTION Teams Up with Trans Alliance

TRACTION traveled out to West Seattle to work alongside Gender Family Alliance in presenting a Trans 101 Panel at Gateway Elementary School. Students, parents, teachers and staff made up a blended audience who listened attentively to the personal stories of the diverse panel. A lively question and answer session followed. 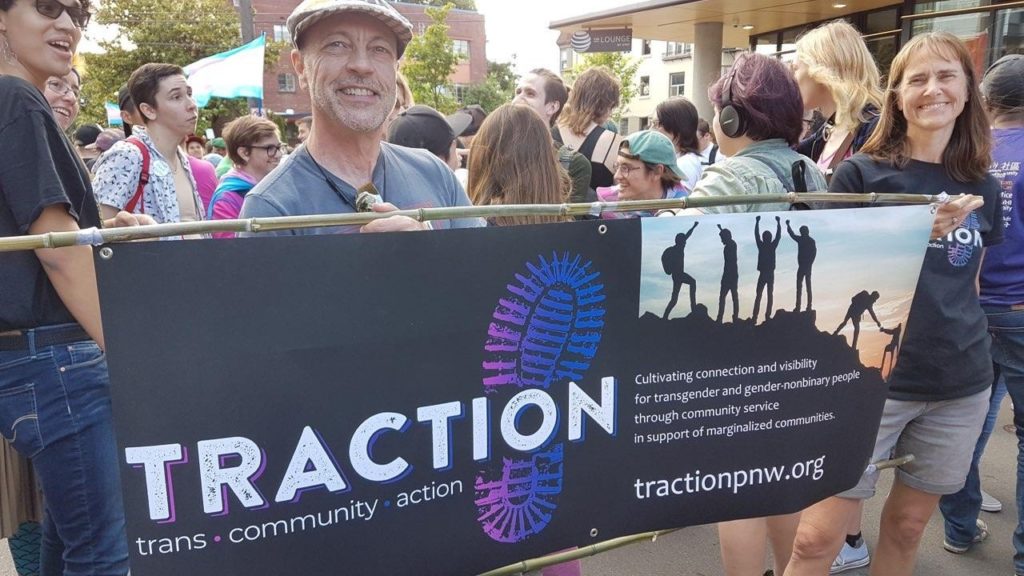 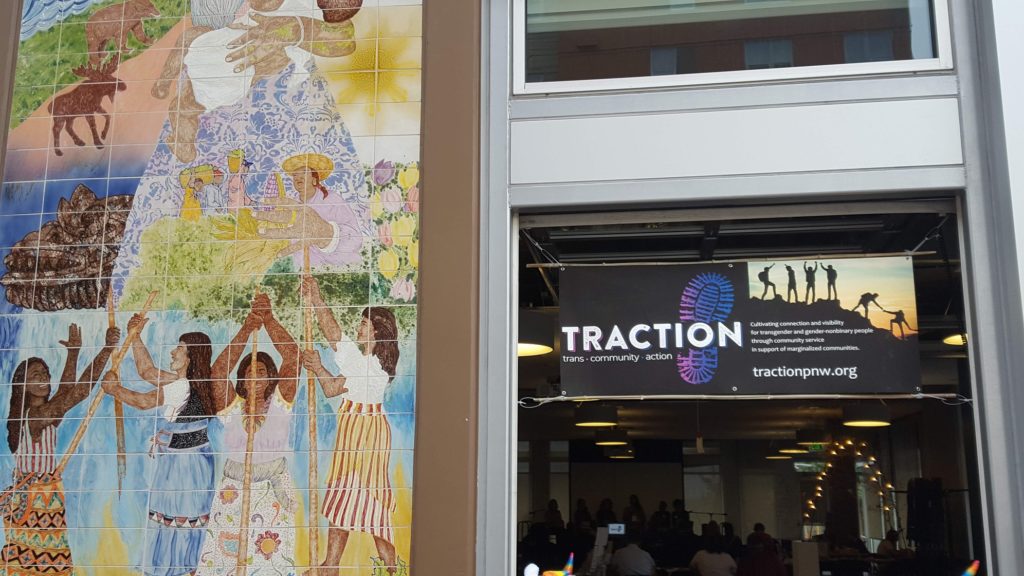 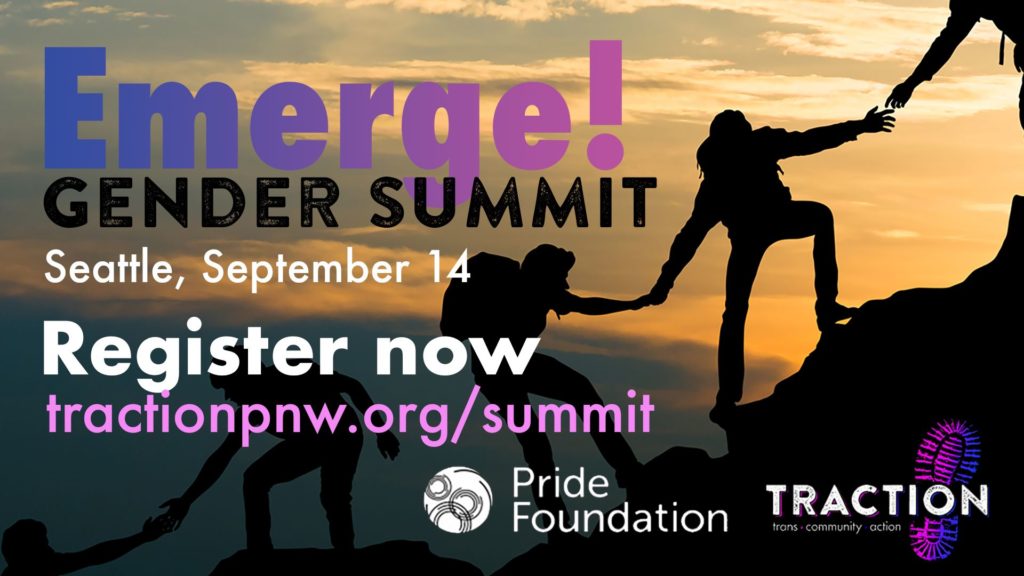 Our inaugural 2019 summit, EMERGE!, was an afternoon and evening of connection and camaraderie. The summit brought community together for a fun, mostly social event that included affinity caucuses, a panel discussion, open mic, picnic dinner, and an all-trans music showcase.

Attendees engaged with 15 community organizations and businesses at our vendor fair while listening to open mic performers and creating origami to add to our community mobile. The caucuses for people of color and for trans parents were also particularly popular.

As the afternoon progressed, the focus shifted to the keynote panel – a conversation around community leadership. Members of the TRACTION Advisory Council and Board of Directors, all of whom were trans people of color, shared their perspectives on and experience with trans leadership and advocacy in the greater Seattle area and beyond. The panelists set an inspiring tone for our community and the change we are manifesting. They included:

The panel and Q&A were followed by a delicious Mexican-themed community dinner and an evening of trans-affirming entertainment (vogue, spoken word, and three musical artists), all led by the fabulous emcee Michelle Matlock. The energy and excitement was palpable, as well as the shared interest in and care for the well-being of our collective trans family.

Tickets were offered at various price points (starting at $10) to accommodate all income levels, and complimentary entry was available.

A grassroots coalition of local/regional Trans/LGBTQ organizations formed to help facilitate the release from detention of imprisoned Trans refugees.

The goal of the coalition is to find host placements for individuals working toward legal standing in the US.

Monserrat Padilla, codirector of Washington Immigrant Solidarity Network speaks to the motivation and goals of the coalition:

“LGBTQ immigrant detention & deportation is a process that places our communities in life threatening conditions. More than 80 countries around the globe criminalize LGBTQ communities, and many more lack the structural protections to ensure safe living conditions. In 2018 at the edge of a crisis in Central America, hundreds of migrants embarked in the journey towards safer living conditions many traveling to the US. As a result, the Washington Immigrant Solidarity Network in partnership with Pride Foundation held a LGBTQ Immigrant & Refugee Summit to behind working towards addressing the growing needs of LGBTQ asylum seekers who where detained at immigrant detention centers across the nation and support in a holistic welcoming form to provide thriving opportunities to migrants fleeing violence and persecution.

“Since then, over 20+ LGBTQ & immigrant serving organizations have come together to provide legal, healthcare, and personal development resources for LGBTQ detained immigrants and support them through a post-release Host/Guest program that sets newly arrived LGBTQ migrants into welcoming communities.”

Founding coalition member Carolyn Draper adds, “Several members of TRACTION are instrumental members of the LGBTQ Immigrant and Refugee Coalition and we rely on their support to fulfill our mission.”

TRACTION traveled to support and participate in the first Tacoma Trans Pride organized by Jae Westbrooks of Trans Cultural. Many South Sound organizations were represented at what will surely be an annual event in the future. 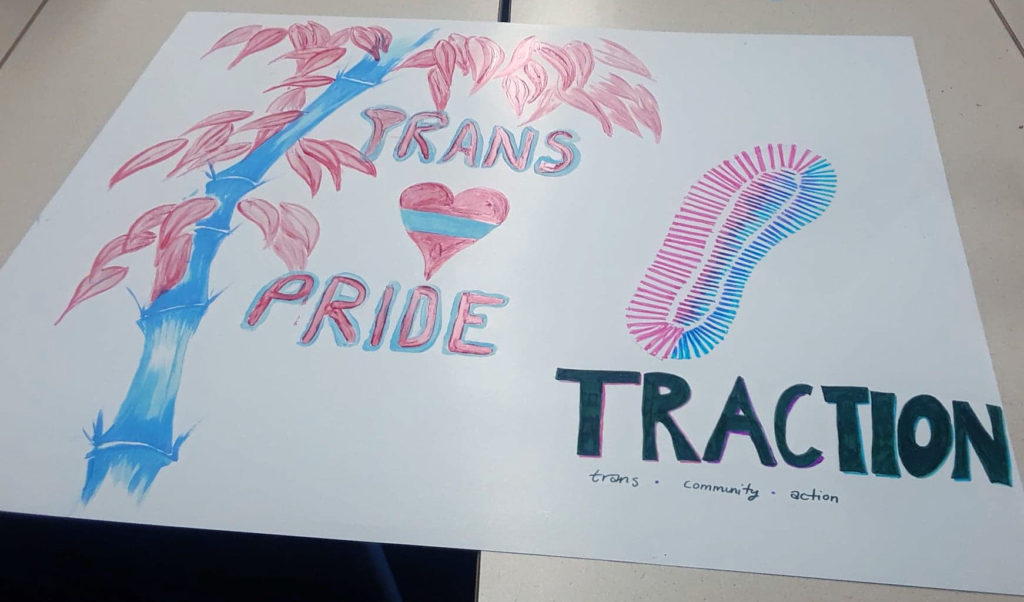 In December, TRACTION was invited to lead the reflection session that wrapped up a 2-day “Community Immersion” program for Bellevue College employees covering the broad topic of Trans Community and Gender Diversity. Many of our local partner organizations participated as well, sharing knowledge and experience on a range of topics, from healthcare to disability, two spirit, sex worker advocacy, juvenile detention, and many more.

The program’s organizer, Sapan Parekh, Associate Director of Service Learning and Community Engagement, had this to say:

“You have challenged long-held beliefs, built empathy for a group that is often “otherized,” and pushed the participants to reexamine their own actions. In the fabulous…reflection led by TRACTION, the participants were asked to talk about what they learned in each of the sessions. I was surprised by how easy this was for them. Every single topic and presenter touched the participants in meaningful ways.”

Currently Youth Care provides support and service to homeless youth who are their clients. Many of these young people are part of LGTBQ Community and many of those identify as Trans Gender.

TRACTION is working to provide support and community for this population through involvement. Sierra Masuda, volunteer coordinator for Youth Care says “We are excited to connect TRACTION with Youth Care and start building partnerships with young people at ISIS Ravenna House and other programs throughout YC who are craving community.”

Stay tuned for even more exciting news in 2020! Please DONATE to help extend TRACTION’s reach, and join our newsletter below to stay in touch with upcoming events.