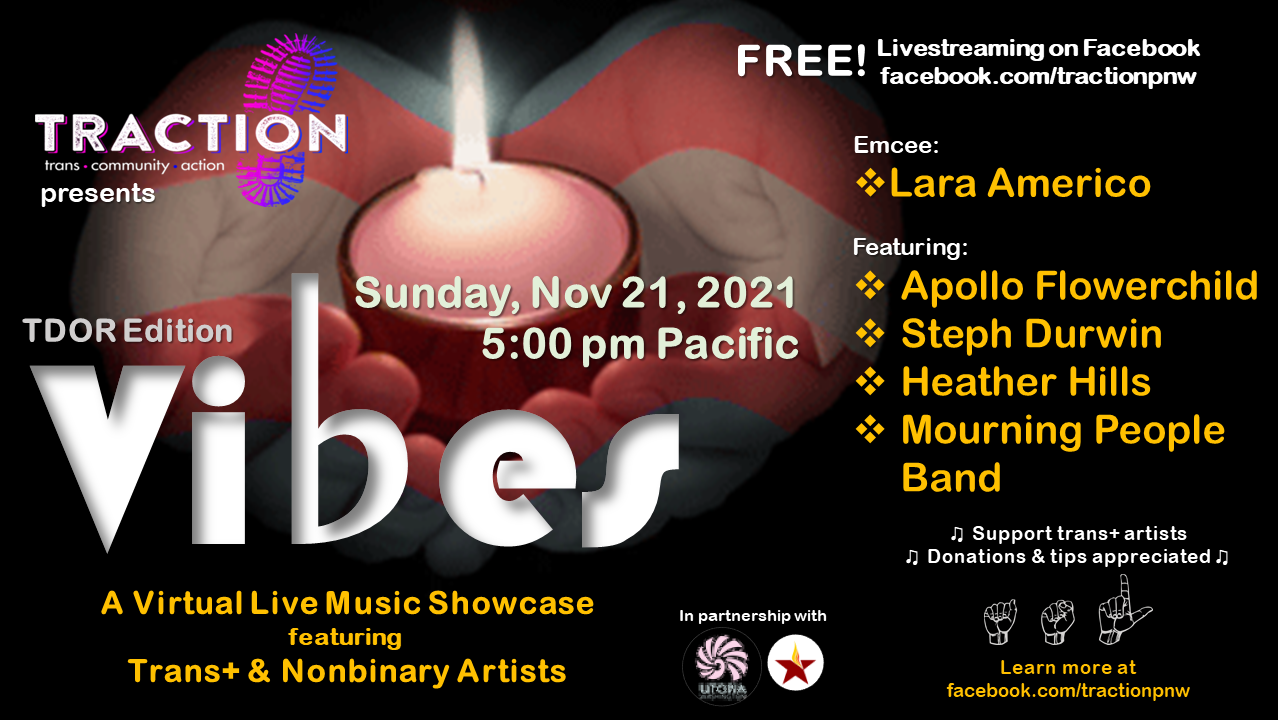 To wrap up Trans Awareness Week, join us Sunday, November 21st at 5pm PST for our final Vibes! showcase of 2021. The amazing Lara Americo hosts all trans/enby artists, livestreamed on Facebook and YouTube. Welcome back from our April Vibes! showcase Apollo Flowerchild, and featuring Steph Durwin, Heather Hills, and the super group Mo(u)rning People.

Your host for tonight’s event is TRACTION board member Lara Americo. Lara is an artist and musician whose focus is on the potential present of indigenous people if it wasn’t for colonization. She is also a journalist with bylines in the New York Times, NBC, and more. She lives in New York City near the site where pride began.

Welcome back to the Vibes stage, Apollo!

“Apollo Flowerchild is an indie/folk artist out of New York. Their soft voice, thoughtful lyrics, and soothing yet stimulating instrumental backings make a perfect soundtrack to a quiet morning drinking coffee or a late night of writing.”

Heather Hills is a trans female rapper from the Jersey shore. She began rapping at 14 and soon switched from musical theatre to being a full-time artist. She has since released an EP called “TGirls” in 2018 and has been mentioned in Out in NJ, THEM, LadyGunn, Billboard, PAPER Magazine and BUST. She is currently working on an EP set to be released next Spring/Summer.

“A small-town girl with big-city dreams, Hills seeks to make music for fellow outcasts. She knows what it’s like to adapt by changing her outside appearance to fit in, while never sacrificing her character or compromising who she truly is.” —Windy City Times

Mo(u)rning People is a super group consisting of the combined talents of Apollo Flowerchild, Steph Durwin, and Lara Americo. Their sound combines folk, shoe-gaze, and country to create a playful melodic foundation for a blend of voices and harmonies. The group works in NYC and is recording their debut EP.

Michael Woodward (he/him) is a writer, rock star, inclusion consultant, and aging queer trans guy, in no particular order. A recovering Hoosier, Michael lived many years in Tucson, Arizona, where he co-founded the notorious trans and allies cover bands, Too Much Information and BlackMagic: A Tribute to Carlos Santana, and worked as a change agent, rabble rouser, and early leader in the gender justice movement.

Michael is the co-founder and current Board Vice President and Treasurer of TRACTION, producer of tonight’s event. Prior to transitioning, he volunteered for 14+ years with the National Women’s Music Festival, one of the oldest on-going live music events celebrating women in the arts. He envisions a post-pandemic world that includes in-person Vibes! trans+ music events that pay homage to his feminist roots.

Presented by TRACTION – trans community action, a 501(c)(3) nonprofit in Washington State. TRACTION cultivates connection and visibility for transgender and gender-nonbinary people through community service in support of underserved communities. Learn more about our work at tractionpnw.org.

This event is made possible through the generosity of Group Health Foundation as well as our community partners Gender Justice League and UTOPIA Washington.

Donate today and make a difference!